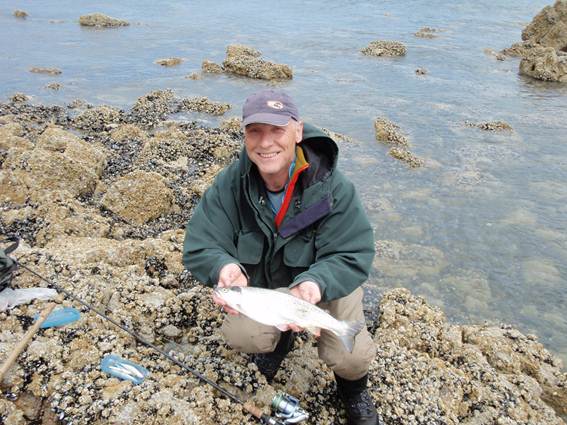 Nigel Milner with a shore-caught sea trout for the CSTP

The vast majority of sea trout caught by anglers are taken from rivers by fly, spinning or bait fishing. But we all know that sea trout spend a lot of their time feeding in coastal waters, so in principle it should be possible to catch them there by angling.  Bass anglers, who spend a lot of time roaming the shores,  often see sea trout leaping,  and occasionally will hook one; but landing them is another matter as their aerial antics, so different from other sea fish  often shake free the hooks.

In a few selected estuaries and sea lochs in Scotland angling for sea trout in the sea is quite common and even the preferred method, but elsewhere it is unusual.  However this may be due to fashion and off the Anglesey coast sea trout fishing has proved to be very successful in the last two years.  Nigel Milner, part of the Bangor University team and a keen angler, has been prompted by the Project to spend time finding suitable places where sea trout can be consistently found and caught by rod fishing.  The best places are shallow intertidal, rocky ground where fast current sweep prey items of sandeels and sprats to the sea trout sheltering from the currents.  At times during 2011, sea trout have been very abundant, with literally dozens of fish leaping in an area of a few hundred square metres, well within spinning distance of the shore.  Some interesting features have emerged. At the Anglesey sites most of the fish in June and July are small fish (see photo), probably this year’s post-smolts, and on some days the fish have all been of one similar size, on another tide they appear to be different sized fish, suggesting some shoaling or at least aggregation of age/size classes.  Some very large fish are seen occasionally, over 10lbs, but these are obviously far less abundant and largest so far taken weighted 4lbs. 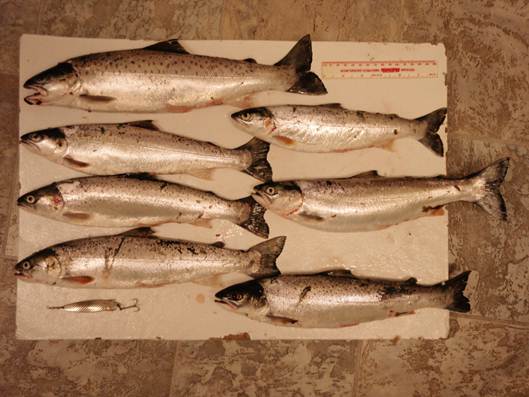 After some trial and error the best way to hook them appears to be small silvery lures like Tobies and Dexter wedges, or small plugs, and a key has been to use nylon line not the braid popular amongst bass lure fishermen, because the stretch of the nylon cushions the leaping actions of  the fish.  You need to get the time of tide right too. Ebb tide at some sites is the preferred time, possibly because it has faster currents and the lures can swing round in the same way as in river fishing.  That is presumably a feature of the local shore configuration.   But it works and Anglesey has produced 17 fish so far in 2011 and, when marine dwelling sea trout have proved so hard to capture by nets on the open rocky coasts, this is a valuable sample.  So why not get down to the shore, hunt out some suitable spots and try it! 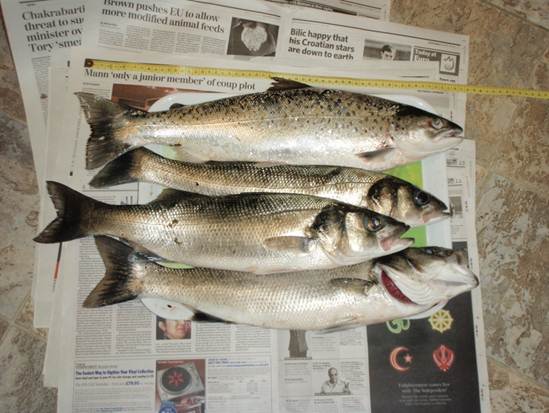 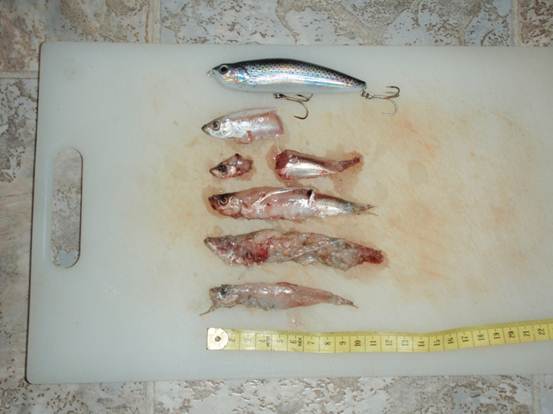 Sea trout had been feeding on sprats, the lure that it fell for is shown at the top.

Please note that fishing with the intention of contributing to the CSTP does not exempt you from fishing regulations. Local regulations are outlined below.
On the Welsh and English coast…

Regulations apply to sea trout angling in the sea as well as in rivers, but these vary around the Irish Sea.  In areas managed by the Environment Agency, out to 6 miles offshore in England and Wales, you must have an EA migratory salmonid rod license, just as when fishing in freshwater. Also you must adhere to any byelaws that apply regarding size limits, seasons and quotas etc.  You can check these on http://www.environment-agency.gov.uk/homeandleisure/recreation/fishing/31465.aspx

On the Irish coast…

Legislation regarding sea trout in Ireland

In the sea the season extends from January 1st to October 12th. If fishing in a specific river estuary, then the close season for that particular river will apply. A number of fishery estuaries are closed or fished on a catch & release basis for sea trout of 40cm or over. Anglers fishing for sea trout must make themselves fully aware of the regulations.

On rivers that are closed or not classified as salmon rivers angling for salmon (any size) and sea trout (over 40cm) is prohibited. For comprehensive information on fisheries in RoI click on this link:http://www.fisheriesireland.ie/Notices/salmon-and-sea-trout-angling-regulations-2012.html

For information about sea trout regulations in Northern Ireland click on this link:http://www.nidirect.gov.uk/index/information-and-services/leisure-home-and-community/leisure-and-recreation/outdoor-recreation/angling/game-and-coarse-angling/angling-licences-and-permits.htm

On the Galloway coast

Anglers do catch sea trout whilst fishing in the coastal waters around the shores of Scotland.  They commit no offence if these fish are captured unintentionally and returned safely to the water.  Under the Salmon and Freshwater Fisheries (Consolidation) (Scotland) Act 2003 section 6 (1) an angler is required to obtain written permission from the proprietor of the salmon fishing rights if he/she wishes to fish for or take sea trout (sea trout and salmon are classified as the same under Scots law).  This law applies to inland waters and the sea up to 1.5 kilometres seaward from mean low water springs.