Sea trout were top of the agenda at a recent meeting between Minister Alun Davies from Wales and Minister Fergus O’Dowd held in Dail Eireann, Dublin. Both ministers were briefed about progress with the INTERREG IVa Ireland-Wales funded Celtic Sea Trout Project which finishes in 2013. 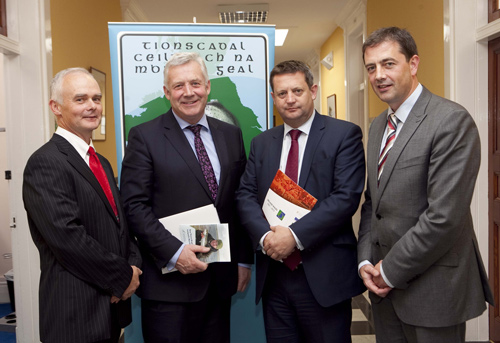 Sea trout are present in most coastal rivers discharging into the Irish Sea and their status in freshwater and in the marine environment in the Irish Sea is central to the project.  By providing detailed information about the status of sea trout stocks, their genetics and their varied life histories the project aims to enhance the fisheries for the benefit of all stakeholders. Strengthening the contribution of sea trout to rural economies, to general quality of life and well-being, to national biodiversity are also important project aims. Sea trout life history variation may also contribute to understanding the effects of climate change.

For sustainable management the Celtic Sea Trout Project team is working on developing a number of management tools which will assist fisheries managers to assess fishery performance and better manage this valuable species. The requirement to manage sea trout sustainably across the Ireland-Wales interface (i.e. the Irish Sea) was strongly emphasised to both Ministers. 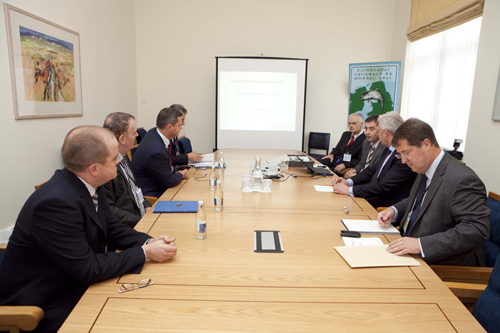 Both Ministers heard that angler engagement across the project has been important to provide sea trout scale samples and that the project has served to increase awareness of the value of this excellent angling species.

Minister Davies, who is Deputy Minister for Agriculture, Food, Fisheries and European Programmes, was also briefed about the role and broad responsibilities of Inland Fisheries Ireland.

Ireland is well endowed with sea trout fisheries. On the east and south coast large systems like the Boyne, Slaney, Ilen, Argideen and Currane are well known high quality sea trout fisheries. But other angling treasures are coming to light through the project – systems like the Castletown in Dundalk and the Colligan in Waterford are potentially excellent fisheries which we have to understand better and conserve. Individually, these sea trout fisheries on our smaller rivers have the potential to generate small but important social and economic benefits within local communities. Collectively, their importance and value at a regional and national level may be far greater than generally realised.

Inland Fisheries Ireland is a statutory body operating under the aegis of the Department of Communications, Energy and Natural Resources and was established under the Fisheries Act on 1st July 2010. Its principal function is the protection and conservation of the inland fisheries resource. IFI will promote, support, facilitate and advise the Minister on the conservation, protection, management, development and improvement of inland fisheries, including sea angling and develop and advise the Minister on policy and national strategies relating to inland fisheries and sea angling.