Sea trout anglers on the east and south coast of Ireland, the west coasts of Scotland, England and Wales and on the Isle of Man have an excellent chance to win one of the many valuable prizes on offer in a free prize draw by collecting scale samples from any sea trout they catch in 2011. The Celtic Sea Trout Project (CSTP) is incentivising anglers to take samples of scales from any sea trout they catch over the season in specific “priority” rivers. 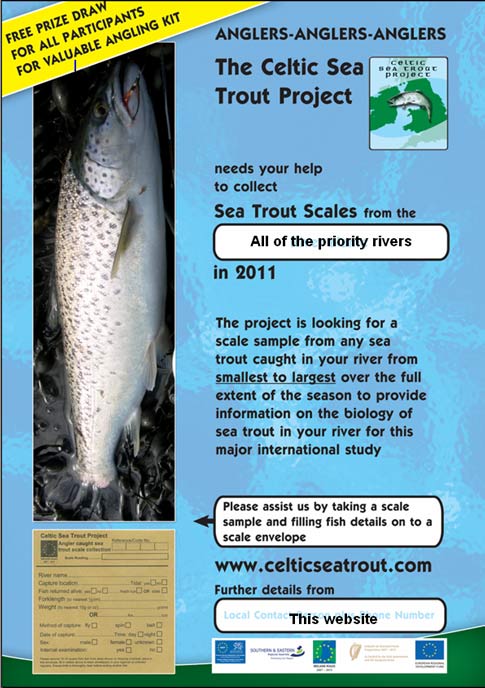 Valuable prizes for anglers who send scales samples from sea trout caught on the priority rivers.

The priority rivers are:

There are major unanswered questions in the understanding of sea trout, namely:

The CSTP intends to provide this missing knowledge and to translate it into fishery and conservation benefits for countries bordering the Irish Sea.

The scales are important samples for this major research project which commenced in late 2009.  Interpretation of scales from river and marine caught sea trout will contribute much to understanding some of these questions as they will provide very important primary information for analysis of river-specific life histories and growth rates.The scales will also be used for novel studies including genetic analysis (so called genetic finger-printing) to characterise individual river stocks, and for micro-chemical analysis to identify thefreshwater origins of sea trout and, specifically, to determine their marine feeding areas within the Irish Sea, based on specific chemical signatures deposited within the scales.

Scale collection is difficult because, apart from fish traps, of which there are only three across the whole CSTP area, the sampling of adults in rivers has to be done by angling.  This is an extremely important element of the project and anglers are encouraged to participate fully so that sea trout can be better understood which will help to conserve this fascinating migratory trout. Scales from sea trout of all sizes, from the smallest to the largest,over the full extent of the angling season are requested and can be taken easily using the basic scale sampling kit which is provided free of charge (seewww.celticseatrout.com for more details).

The winners will be chosen based on the scale samples submitted to us before 31st March 2012. The prize draw will take place on the 1st of April 2012. Winners will be contacted directly.