Last week, on a balmy July evening anglers from the Rossin & Slane District Anglers club hosted a special competition to provide sea trout scale samples for the Celtic Sea trout Project (CSTP). Over 30 anglers fished hard in low water conditions, not only increase awareness amongst members about the project, but also to enjoy some of the lovely pools and runs in the lower reaches of the Boyne sea trout fishery near Oldbridge which the club operates. 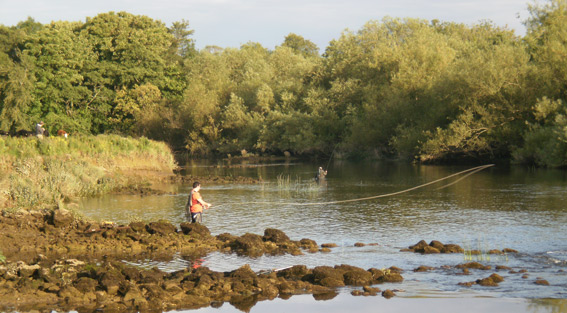 On the night Club Chairman Liam Rice said that the club wanted to support the CSTP as much as possible by taking scale samples for the remainder of the season, and, at the same time to encourage club members to enjoy their excellent fishery. The Boyne, a highly regarded salmon fishery, is open for catch-and-release salmon fishing in 2011.  Somewhat less well-known as a sea trout fishery, the Boyne is regarded by the INTERREG 4A funded CSTP as one of the ‘priority’ systems for the CSTP which means it will be subject to detailed investigations of its sea trout populations.  These ‘priority’ catchments were selected by the CSTP project team on the basis of the quality of their sea trout angling and include the Castletown, Slaney, Argideen and Lough Currane fisheries.

Conditions on the night were difficult due to exceptionally low water after a very dry month, and slightly elevated water temperatures meant that activity was a little slow. Six fish were caught on the night – ranging from 10 ozs to 1½ lbs. After the 11 pm finish scores were tallied and Joe Coleman emerged as the winner. Scale samples were taken from all fish by biologist John Finn from Inland Fisheries Ireland who was there to help out and he even managed to assist in sampling by casting a few of his favourite flies.  Further events are planned by the club to assist the CSTP and Liam Rice said that the club would “do all that was possible to provide samples for this very important piece of research. The Boyne deserves to be included as one of the best sea trout fisheries in Ireland and the club will continue to work on improving it.”