Two Irish anglers, Martin McKenny from the River Dee and Brian McShane from the Castletown River, were the top sea trout samplers for the Celtic Sea Trout Project in 2011. Both anglers, plus several other Irish winners, will be presented with their valuable tackle voucher prizes by Minister Fergus O’Dowd at an Inland Fisheries Ireland’ Fisheries Awareness Week’ event on May 20th, in the Ardboyne Hotel, Navan, Co. Meath.

Martin, who regularly fishes the Dee, provided the most sets of sea trout scales from fish he caught on rod-and line in his favourite river. In the runners-up spot was Brian McShane who also provided a large numbers of sets of scales from the beautiful Castletown River. Virtually all fish were returned alive after the small sample of scales had been taken.

Congratulating all the Irish winners, Minister O Dowd stated ‘I commend these anglers and their efforts in supporting the Celtic Sea Trout Project. The success of the project is assured with such cooperation from the winning anglers and all participating anglers who have contributed so much to the project.’ 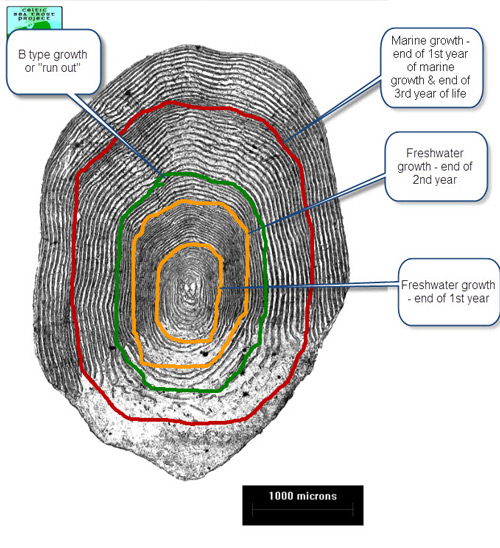 Since 2010 scales have been collected by anglers from sea trout from priority rivers which flow into the Irish and Celtic Seas in Ireland, Wales, Scotland, England and the Isle of Man. The scales, which are like life history diaries, will provide scientists working on the Celtic Sea Trout Project with essential information on sea trout populations in the rivers sampled including their age, growth and how many times they have spawned.  The project, which is part-funded by the European Regional Development Fund under the Ireland Wales Territorial Co-operation Programme 2007-2013 (INTERREG 4A), aims to increase our understanding of sea trout, in order to manage them better and increase their contribution to local economies and the quality of life. Full details about the project on www.celticseatrout.com

Many thanks to all contributors and the CSTP team hope all anglers will continue to support the project throughout 2012.

The sea trout, which is the migratory form of the brown trout, migrates to sea to feed where it grows rapidly before returning to freshwater to spawn. It is very popular target of rod anglers in the rivers and coastal waters around the Irish Sea. The Celtic Sea Trout Project is a ground-breaking, €2 million, multi-agency partnership investigation into the sea trout stocks and fisheries of the rivers entering the Irish Sea which commenced in 2010. The project is part funded by the European Regional Development Fund through the Ireland Wales Programme (INTERREG 4A). Inland Fisheries Ireland and University College Cork are the main project partners in Ireland. The Celtic Sea Trout Programme aims are to understand and describe sea trout stocks in the Irish Sea in order to enhance their fisheries, and strengthen their contributions to quality of life, to rural economies and to national biodiversity, and to translate new knowledge gleaned from the project into fishery and conservation benefits for countries bordering the Irish Sea.  The marine ecology of sea trout will be a primary focus of this study.
Ten rivers in Ireland have been chosen as priority rivers for intensive study of their sea trout populations and anglers have been asked to provide samples of scales from sea trout they catch. The full list of rivers is:
The Shimna, Newcastle, Co. Down.
The Castletown River, Dundalk, Co. Louth
The River Dee, Annagasson, Co. Louth
The River Boyne, Drogheda, Co. Louth
The River Dargle, Bray, Co. Wicklow
The River Slaney, Wexford
The Colligan River, Dungarvan, Co. Waterford
The River Bandon, Bandon, Co. Cork.
The Argideen, Timoleague, Co. Cork
Lough Currane, Waterville, Co. Kerry.

Inland Fisheries Ireland is a statutory body operating under the aegis of the Department of Communications, Energy and Natural Resources and was established under the Fisheries Act on 1st July 2010. Its principal function is the protection and conservation of the inland fisheries resource. IFI will promote, support, facilitate and advise the Minister on, the conservation, protection, management, development and improvement of inland fisheries, including sea angling and develop and advise the Minister on policy and national strategies relating to inland fisheries and sea angling.