The Celtic Sea Trout Project (CSTP) is a European Union, Interreg IV-funded, Ireland-Wales collaborative project looking into the status, distribution, genetics and ecology of sea trout around the Irish Sea. This note briefly outlines progress in 2010 for the many helpers and participants in angling clubs, river trusts and other organisations.  More detailed technical accounts will be available in due course.

Two fulltime Project Officers were appointed under contract in May 2010: one each in Ireland and Wales, to run the sampling and data handling tasks that support the rest of the CSTP.  Contractors were also appointed by August 2010 to undertake certain of the specialist tasks (fisheries analysis, life history analysis ad modelling, and hydrodynamic modeling).  Formal launch meetings were held in Wales and in Ireland.

The CSTP is totally reliant upon effective field sampling to collect data and material from fish (tissues, gut contents, gonads scales etc) for the scientific analysis. For example, the genetics and microchemistry analysis, that will tell us about the mixing and distribution of stocks, requires a baseline of measurements to be made in all the principal rivers around the Irish Sea which are likely to contribute to sea trout stocks.  River sampling of juvenile trout for the genetics was the focus of the CSTP team’s work in 2010 and was 95% completed in full using a large scale electro-fishing programme, taking samples from around 80 rivers.  Some preliminary marine sampling was also carried out.

A major part of the sampling programme is the collection of scales for analysis of life histories, and growth rates in sea trout.  This is particularly difficult because, apart from fish traps, of which there are only three across the whole CSTP area, the sampling of adults in rivers has to be done by angling.  Moreover, scale reading and analysis are labour-intensive and time-consuming which limits the numbers of samples that can be dealt with.  Accordingly, we have restricted this part of the programme to 25-30 rivers, selected to cover the Irish Sea and where angling catch has historically been large enough to provide the samples. This part of the sampling programme has required extensive liaison with angler groups and distribution of sampling kits and scale envelopes.  Several talks on the CSTP were given during the winters of 2008/9 and 2009/10 to clubs and associations across Wales, Ireland, Scotland and England.   We aim to collect scales from at least 300 adult sea trout from each of the selected rivers over the two main years of sampling (angling seasons 2010 and 2011).  A feature of the scale sampling programme is the need to collect samples from the full size range of sea trout in these rivers to reflect the overall population structure.

The collection of scale samples in 2010 has not gone as well as the juvenile sampling and the returns to date fall well short of the indicative annual target of 150 fish /river (see Figure 1), which includes a small number of samples taken in 2009).  Only the Nith and Border Esk in UK and the Argideen, Castletown and Currane in Ireland reached the target levels and most others achieved less than 20%.  This was not due to fish shortage because catches were comparatively high last year. A major effort will be made in 2011 to raise awareness and to promote scale sampling by anglers, which will include a valuable incentive scheme. 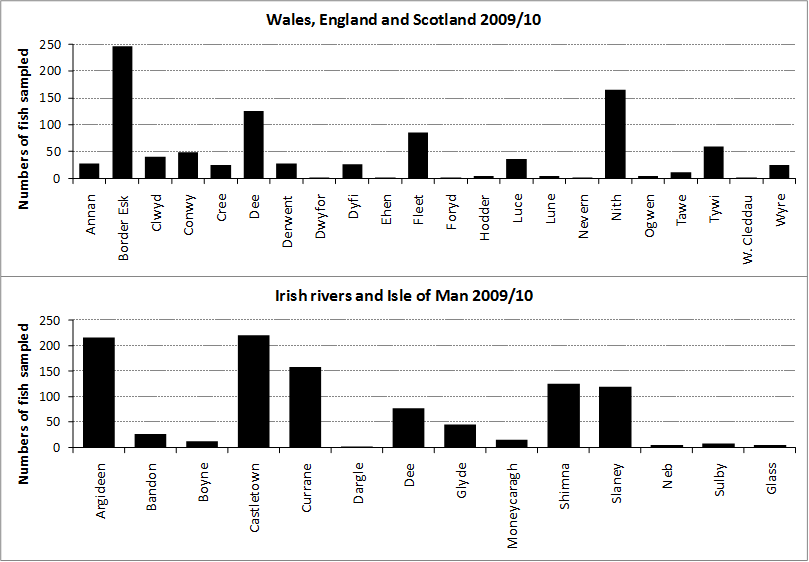 Samples taken in last year’s surveys are being processed at the moment.  Genetic analysis at the Universities of Cork and Bangor is now in full swing, and a first look at the base line description should be possible in March 2011.  Scale data are being coupled with the extensive and catch statistics to describe variation in the complex life histories of sea trout and to develop analytical approaches that will enable the impacts of environmental pressures to be investigated.  Other tasks on marine feeding and distribution modeling and fisheries analysis will start in 2011.

Sampling by anglers in 2011

The CSTP needs the continued support of anglers to collect the required scale samples in 2011. Scales from sea trout of all sizes across the full angling season are requested and can be taken easily once you have the basic kit which we provide. CSTP project team members are available to present talks to your club if required.  Contact us through the CSTP website www.celticseatrout.com .

THANK YOU FOR YOUR ASSISTANCE.